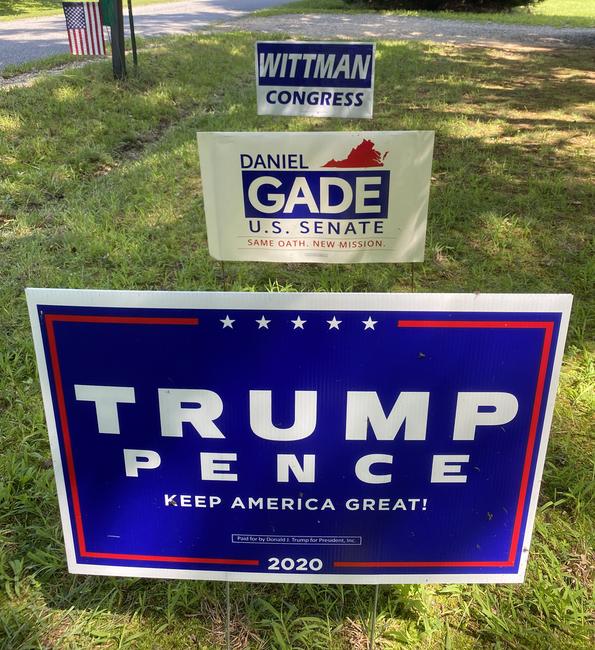 I trust that everyone is enjoying this Labor Day weekend.  The weather certainly is nice for a road trip and picnic with friends and family.  Hopefully the typical holiday traffic wasn’t too much of a pain for you.

We had a FANTASTIC monthly meeting this past Thursday where Congressman Rob Wittman joined us.  The meeting was yet another collaborative effort between the King George Republican Committee and the KGTP but, honestly, the success for this meeting was all due to the KGRC’s efforts.  There was a fantastic turn-out, Rob delivered a great monologue getting everyone caught up on current events, and we had plenty of time for the audience’s questions.

I have had the pleasure of attending a few of Rob’s events over the years… but this one was different.  Rob, and by extension his fellow Virginia Congressmen and women, have taken a more Conservative posture in legislating.  For me, the iconic example was his speech a few years ago where he consistently used the phrase, “repeal and replace” with respect to Obamacare.  For we Conservatives that was a sell-out position because we are not interested in a Republican version of Obamacare and instead want the free-market to cater to us as customers.  At the time I was rather disappointed in both Rob and the Republican Party at large.

But now things seem to have changed.  Rob specifically emphasized in his discussion this last week that his perspective has changed from “lets get it done” (with "it” being a legislative success) to "lets get it right for America” and calling THAT a success.  I am MUCH more pleased with the latter approach to legislation.  Additionally, Rob explained that the Republican Party has recognized that trying to be a team player with the Democrats by adopting their demands for a “go along to get along” attitude yields poor legislation for Virginia.  The Republicans now are taking a more hard-nosed America First position and recognize that they are just going to have to make their case as to why their legislation is best for Virginia and the country.  I and many others in the audience were elated to hear this.

As a result, the King George TEA Party enthusiastically voted to endorse all of the Republican candidates in the November 2020 election: Rob Wittman for Congress, Daniel Gade for Senate, and Donald Trump for President.  They are the best candidates to represent our region, our state, and to lead our country.

As you will recall, I have not been able to send out my typical news ‘data dump’ because of travel and such.  Fact is, I have a 4-week backlog of news that I have finally collected, categorized, and present below.  This was, though, a rather depressing exercise as I was just amazed as to how much propaganda-related, censorship-related, attacks on Conservatives-related, and election mail fraud-related news stories there are. One theme that seemed to emerge was that of ‘gas lighting’ the possibility of election-related violence.  Here are two articles that cover that topic as an overview:

What bothered me most was that the war game both of these articles were based upon was deeply flawed and is expected to provide the worst-case outcome that it did.  Read these articles for yourself and recognize that the Republican side of the war game was “played” by Never-Trumpers that did not reflect how I believe President Trump and his administration would react to the four scenarios.  Thus, garbage in gives garbage out.  So you must then ask the question, “Why is the media projecting a warning that election-related street violence is to be expected?”

Well, I believe it is because their violent scenario is being used to precondition the American public.

Over the past 3 months I have not collected an expansive archive of ANTIFA / BLM news articles so I can not speak authoritatively about their trends.  Counter-terrorism is not a core TEA Party line of analysis.  What I can do, however, is cherry-pick a few that seem to support what we have all seen go on.  The violence has been both extreme and widespread, the violence continues apace, their actions do NOT support their professed belief that “black lives matter,” and that their continued quest for insurrection is liable to initiate results that they, and We The People, cannot predict.  The below draws that online:

All of this does, however, support everything that Scott Catino briefed us on in July.

"During the Tea Party protests, which were rather civil by the standards of Code Pink during the Iraq War — much less what happened Thursday after President Trump’s acceptance speech — Hayes seemed genuinely disturbed about the threat to our small-D democratic way of life.  Now, protesters threatened numerous conservative figures — including Rand Paul, who has already been the subject of a vicious assault by a neighbor — and Hayes is telling us this is the kind of behavior he defended from the Tea Party."

"'Help me tax the wealthy. Help me redistribute wealth. Help me build affordable housing in white communities if you want desegregation,' de Blasio said on WNYC’s 'The Brian Lehrer' show after a caller asked about integrating public schools.  'If you just talk about it and feel self-satisfied, God bless you,' de Blasio said to the caller <Snip>.  'That’s not actually going to change things. What changes things is redistribution of wealth. Tax the wealthy at a much higher level,' the mayor said."

"And, by the way, 30 percent of the people living in suburbia are minority groups — African American, Hispanic American, Asian American. They’re minority groups. They don’t want to have their American Dream fulfilled and then have a low-income housing project built right next to their house or in the neighborhood. They don’t want it. That’s not part of the deal. And I terminated that."

National Debt / Its the Spending, Stupid!

"We’ve become accustomed to addressing all our problems with more spending. When Barack Obama was inaugurated president in 2008, the federal debt had ballooned to $11 trillion. When Donald Trump arrived eight years later, it had almost doubled to $20 trillion. The debt clock now stands at $26,647,860,701,599 as I type this, soaring upward at a dizzying pace, and critically important “off balance sheet” liabilities for future obligations such as Social Security and Medicare have been estimated at triple that number. At what point must we question our national solvency?"

"The president said that the economy was on the right path, but warned that if Democrats took the presidency in November and raised taxes the country would suffer greatly in 2021.  'If stupid people aren’t elected next year we’re going to have one of the greatest years we’ve ever had,' he said."

"President Donald Trump released his second-term agenda on Monday, sharing it in an email to journalists; he is promising more of the same policies he pursued during his first four years as president."

"But abuses by government are happening at all levels in this country that are officially justified by the Covid Pandemic, but which clearly have little or nothing to do with stopping the spread of a disease whose dangers it is becoming increasingly clear have been severely exaggerated."

"Jason, another one of the armed residents, said, 'A lot of us are veterans (both men said they served in the Marines), some are former cops, so we’re comfortable (handling firearms). We’re simply doing nothing more than protecting the subdivision.'"

Abortion / Right to Life, Liberty, and the Pursuit of Happiness

"After a conference call with reporters, a senior administration official told Breitbart News that the implementation of the Protecting Life in Global Health Assistance policy (PLGHA) is going to save countless lives around the world by preventing the funding of organizations that promote or provide abortions, including International Planned Parenthood. This is according to reports released after the call."

"So why are the Democrats—publicly—talking about the conspiracy? Because they know that, for it to succeed, it must not look like a conspiracy. They need to plant the idea in the public mind, now, that their unlawful and illegitimate removal of President Trump from office will somehow be his fault."

"New Jersey’s Democrat governor signed a bill on September 1 that allows illegal migrants to take well-paying licensed jobs from Americans and legal immigrants, even amid the dramatic recession that has pushed many Americans out of jobs."

"While FCPS doesn’t and can’t control these private tutoring groups, we do have concerns that they may widen the gap in educational access and equity for all students. Many parents cannot afford private instruction. Many working families can’t provide transportation to and from a tutoring pod, even if they could afford to pay for the service."

"Overwhelmed law enforcement protected the courthouse, but Sam’s business and many others were left at the mercy of the mob. 'I’m a taxpayer,' said Sam, clearly distraught that law enforcement did nothing to protect his business. 'This is not the America I came into,' the shattered man said. 'What did we do to deserve all this?' he asked. 'I’m a minority too. I’m a brown person. I have nothing to do with this.'"

"No, here is the indigestible truth for the Democrats. Donald Trump has had the most successful first term of any president in memory, maybe ever.   His policies brought unemployment down to the lowest rate in decades, Among black and other minority populations, it was the lowest ever—ever. Wages, especially wages at the lower end, were rising, prescription drug prices were falling, and manufacturing was flooding back to the United States, a direct result of Trump’s America First trade policies. He came to office promising to lose two regulations for every new one enacted, but has managed to lose nearly 20 regulations for every new one. His exploitation of America’s energy resources have not only made the country energy independent, they have made us a net exporter of energy."

"Sandia executives have made it clear: they want to force critical race theory, race-segregated trainings, and white male reeducation camps on their employees—and all dissent will be severely punished. Progressive employees will be rewarded; conservative employees will be purged."

"'Approximately half a million applications sent to eligible voters in Virginia included incorrect information, and we are working diligently to address the issues. Mistakes in our programming are very rare, but we take them seriously, and our methods overall are extraordinarily effective,' the center said in a statement."

"'We’re all just nothing more than a group of volunteers,' founder Cliff Gephart said of the event in a video Thursday.  'We’re not getting paid for this. We’re donating all of our time and the money we raise to political campaigns come this fall and to charity. So we’re doing nothing but trying to do our best to make this the coolest Trump parade ever,' he concluded."