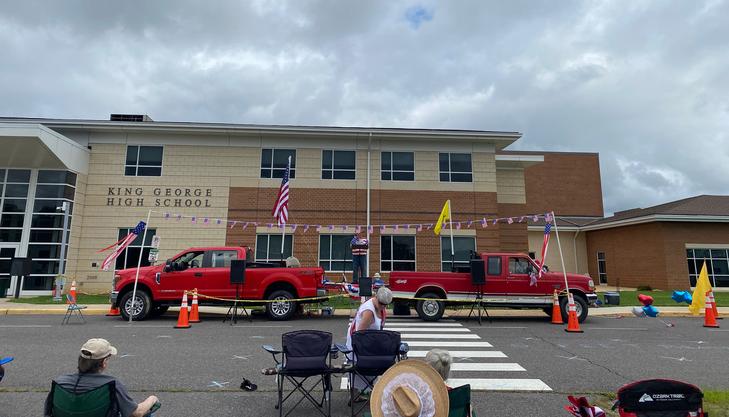 After two weeks of scrambling to organize the One Nation Under God rally we can honestly say that together we put on a FANTASTIC event.  The official count of entrants is 34 but that count was taken AFTER we had a huge bunch of folks arrive an hour prior to help with the setup.  Tanya did a headcount during the middle of the event and said that our total attendees numbered right at 95.  At the writing of this e-mail, some 4 hours after the event, there were 90 Facebook video views already.  What a great turn-out!!!

If you were unable to attend in-person, you can ‘attend’ by watching the Facebook Live video here (no, you do NOT need a Facebook account to watch the video):

As much planning that went into this event there were several points in the event that were both unplanned and spectacular.  The most notable is that John and Jennifer brought a HUGE American flag and someone organized the children at the event to bring it up toward the stage.  Watch the video and see what a fantastic display this became as part of the opening ceremony.  Then there are the prayers and speeches… talk about powerful messages!!!  They were ALL incredibly wonderful.  So grab a drink, pop some popcorn, and watch the video for yourself.

The success for the One Nation Under God rally is due to all of the help that was provided.  It is one thing to put together a sign-up list and request volunteers… it is quite another thing when everyone arrives, all of the tasks are completed 20 minutes EARLY, and everything is ready for showtime.  Everything and everyone.  What a blessing this was.