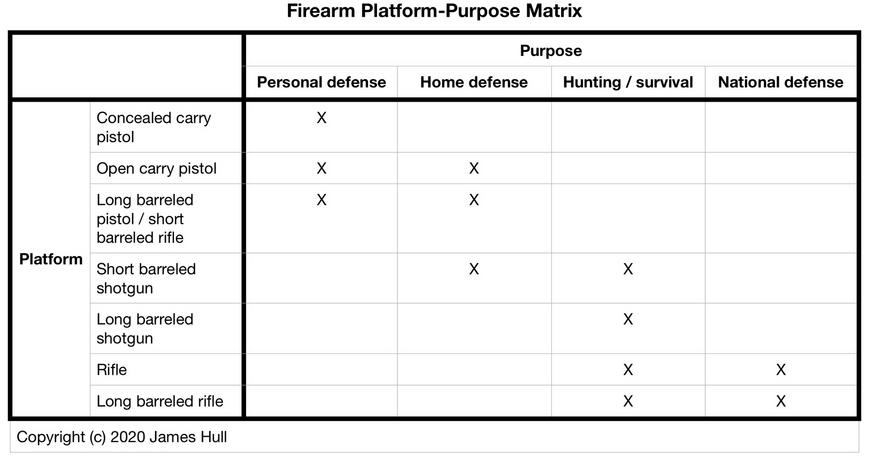 Wow… what a difference a couple of hours can make.  This weekend I crafted this week’s Newsletter and put the final edits in it this morning.  Funny thing is that it looks like the Democrats in Richmond decided to TEMPORARILY defer HB 961 until next year… making what I had written earlier a little dated.  After reviewing it, however, everything that I put together is still relevant and timely… but instead of having only a couple of months to prepare for an “assault weapon” ban you have a whole year.  For some, especially those that are financially constrained, this may be a welcome reprieve.

Here are the news articles that came out today regarding HB 961, including the most salient quote from the top article:

Note that “tabled” merely means something akin to “we will try again next year.”  Therefore, this issue is not going away.

Regardless of today’s deferment for HB 961, please consider what I have put together below.

This is another “one-off” Newsletter as it is singularly focused on one topic: my recommendation to you to legally exercise your Second Amendment right to keep and bear arms – NOW.  As was predicted, the Democrat majority legislators in Richmond have demonstrated their flagrant refusal to represent We The People Of Virginia and are pushing ahead to impose extreme gun control laws (see the e-mail from Carol Stopps).  Sure, we all expect these laws to be challenged in court… but you CANNOT count on any legislative reversal to be timely, as in happening soon.

You must consider the ramifications of what will happen to you if you do not prepare for the scenario where some of this legislation becomes law.  While there are many bills that you should be gravely concerned about… there is one proposed law that you can exercise some measure of control.  That bill would be HB 961 which will implement an “assault weapons” ban.  If you do nothing to proactively mitigate the effects of HB 961 you will lose your right to defend yourself, defend your family, and defend your country using a well-proven piece of firearms hardware.   To counter this situation you will need to purchase the bare minimum essentials before Virginia removes your constitutional rights to do so.

Take a look at the below table that (in simplistic terms) matches broad classes of firearms with the purpose for which they are most appropriate.  For example, rather small pistols that are suitable for carrying concealed have the specific purpose of enabling you to defend yourself while you go about your daily life.  The inaccuracy due solely to their small size, however, does not enable them to be effective in longer range situations (i.e., hunting with a concealed-carry pistol is a rather silly idea).  Sure, you **can** use a firearm designed for concealed carry (small, light, short barrel length, few rounds in the magazine, etc.) for longer distances but you would miss your target more times than if you were to use a more appropriate platform.

The most ubiquitous firearm type classified by the Democrats as an “assault weapon” is the AR-15 type of firearm.  The fundamental element of an AR-15 is the lower receiver and it is the only part of the system that has a serial number embossed on it.  Specifically, when you purchase an AR-15 from a gun store, that part (the lower receiver) is the only part of concern with respect to a background check.  The best thing about the AR-15 platform, however, is that by using only a few tools you can either build from scratch, slightly modify, or even completely re-configure the system based upon that same lower receiver.

A couple of minutes surfing the Internet for images will demonstrate the vast spectrum of AR-15 configurations.  The two AR-15 configurations that are most important for this discussion are the typical “full size” rifle (with a 16” barrel length or greater) and the shorter versions called either a “long barreled pistol” or a “short barrel rifle.”  For this discussion I am going to largely ignore the legal (and important, so see the graphic below) distinction between the two shorter versions (“long barreled pistol” and “short barreled rifle”).  Here we will deliberately focus on the “long barreled pistol” because you can build them, own them, and use them provided you can otherwise legally own a pistol.

Now take a look at the graphic again.  Notice that the flexibility of the AR-15 system configured as either a long barreled pistol or a rifle enables the firearms owner to use it to address the broad spectrum of firearms purposes… everything from personal defense, to home defense, to national defense.  This is the unique value of the AR-15 platform and why it has become so popular.  By deliberately banning the AR-15 the Virginia Democrats have revealed their intention to make it harder for you to do any of those things – to defend yourself, to defend your family, or to defend your nation “… against all enemies, foreign or domestic.”  Yes, this is what governments have historically implemented as they transition to tyranny – examples include Britain leading up to the Revolutionary War, Nazi Germany, and present-day Venezuela.

So what to do?

Stated plainly, there is nothing we can do to **prevent** the Virginia Democrats from acting like the totalitarians that they have demonstrated themselves to be.  Elections have consequences and that means that gun control fanatics now run Virginia’s government.  The only thing that you can do, therefore, is to **mitigate** what they are planning on doing to us now and begin to reshape our future by educating our fellow citizens in preparation for the next election.  For the former, you must take some actions that exercise your Second Amendment right to keep and bear arms while you are still able to in Virginia.

The issue is that you are now in a race – a race between your ability to defend yourself, your home, and your nation using a firearm protected under the Second Amendment versus the Virginia Democrat’s totalitarian actions to ram gun control laws upon We The People Of Virginia.  By my estimate, the timeline for this competition is on the order of A FEW MONTHS, so set your personal priorities accordingly.  Look at the below To Do list and make the appropriate investment in your Second Amendment rights.

Another incentive for you to own an AR-15 platform is the reality that some handguns are very difficult to operate.  Specifically, some handgun’s springs can be quite stiff, their slides can be difficult to grasp, and some people just do not have the hand strength to put a handgun into action.  I know this is a significant issue because two of my family members have told me that they have this problem, i.e., a handgun is useless for them because they cannot “rack” the slide.  In contrast, however, is the fact that the AR-15’s Charging Handle is MUCH easier to grip, the Buffer Spring is much less stiff, and the AR-15 itself can be rested upon almost any surface to assist putting the firearm into action.  If hand grip strength is a significant consideration for you then the capability afforded by an AR-15 may be the determining factor for what type of firearm you rely upon for personal and home defense.  And if this is a factor for you and your home’s security then acquiring an AR-15 may rise quite high on your priority list.