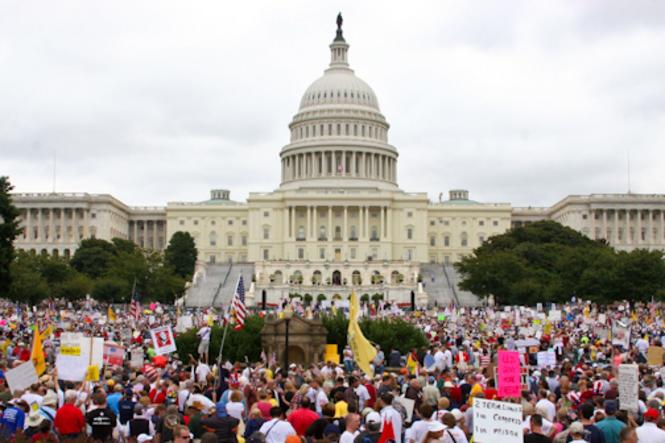 The King George Tea Party is:

​The Mission of the King George Tea Party is to:

​The Values, Principles, and Activities of the King George Tea Party are:

​In early July 2009, I noticed a (quite small) advertisement in the Fredericksburg Free Lance-Star newspaper about a July 4th Tea Party Rally in Stafford at the Courthouse.  Ginny and I attended and signed up to join the John Adams Patriots Tea Party.  The early meetings were held in the John Adams Patriots leaders home and had very few attendees –sometimes 4 to 6.  As members of this group we carried protest signs in Stafford (about health care) and attended the 9/12 Rally in Washington, DC (there were millions of people from all over the US).

In April 2011 I gave a speech at the Tax Day Rally in Stafford.  The speech was entitled, “An Angry American” (still on YouTube I believe).  After the Rally I was asked to give the speech at the Culpepper Tea Party Rally on the actual Tax Day.  This I did and after my talk we joined the Culpepper Tea Party on the bus to the Rally in Washington DC.  At that rally I was approached by some people who had attended the Rally in Stafford and was asked why we didn’t have something like the Tea Party in King George, I thought about it for about 2 seconds and said, “Yeah, why not!”

A few days later, Ginny and I made some flyers and walked around our neighborhood and handed out the flyers and talked with as many of our neighbors as we could.  We had our first meeting in our home at which 9 people (7 besides Ginny and I) attended.  Shortly thereafter we began meeting at the county library once a month.  The group began to grow in numbers and we needed more space.  I inquired about using the American Legion Post and we started meeting there (Ginny and I remained members of the John Adams Patriots).  When we became large enough and with the sponsorship of the John Adams Patriots Tea Party we joined the Virginia Tea Party Federation – that was in the early Spring of 2012.

​The King George Tea Party has been rolling ever since.